The Model 66, manufactured from 1910-1918, served as Pierce-Arrow’s flagship vehicle. For 1917, they offered Models 38, 48, and 66, based on the vehicle’s advertised engine horsepower rating. Considered one of the era’s great motorcars, the 66 featured a massive 825 CI inline six-cylinder engine, among the largest ever offered in a passenger vehicle. Though rated at 66 HP, many claim it was actually over 100, a phenomenal engineering accomplishment at that time. According to the Standard Catalog of American Cars, 1805-1942, Pierce offered the 66 in a staggering 15 different body styles, with most coachwork accomplished in-house. Equally staggering was the price, which ranged from about $6,400 to $8,000. For comparative purposes, a 1917 Ford Model T was approximately $400.

Our Model 66 Seven-Passenger Touring Car led a full life! Prior to its donation to the Museum by Pauline Becker of Florida, it was used extensively for regular transportation and later driven to Pierce-Arrow gatherings and other antique car events across the country. Mrs. Becker and her husband drove this car and a companion 1917 Model 38 to events, rather than trailering them, regardless of the location. Both Pierce-Arrows found a new home at the Museum, not long after our 2003 opening. In recognition of the Becker’s generous gift and their long-term commitment to the hobby, both are kept in running condition and frequently taken to car shows and offsite events. 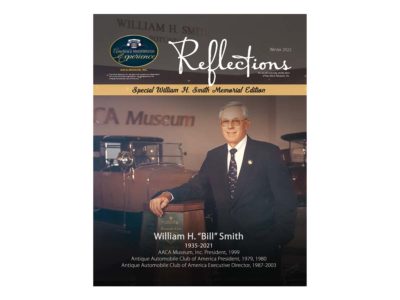 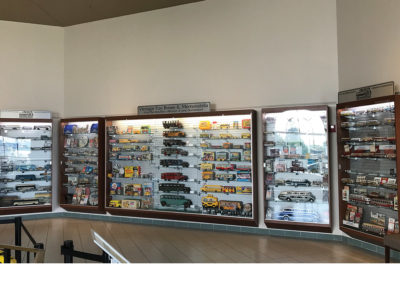 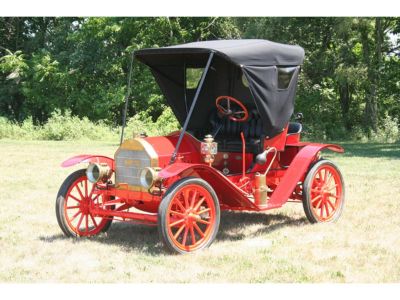 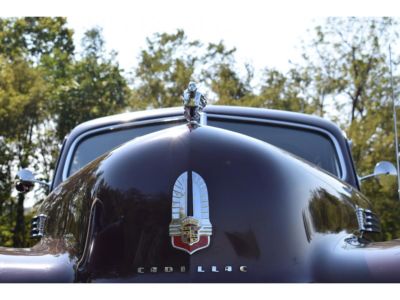 The Nimble and Popular Brush Runabout

In the early 20th Century, America had thousands of independent automobile manufacturers and marketers. In Detroit, Brush Motor Car Company, later known as the Brush Runabout Company, was founded by Alanson Partridge Brush in 1907. Brush, a self-taught designer, worked with Henry Leland, founder of Cadillac, to develop the company’s first, single-cylinder model vehicle. Brush’s company lasted only four years, producing its last vehicle in 1911. However, their lightweight, nimble two-seat runabout was one of the most popular cars in its genre.

Brush designed the car with a single-cylinder, six-horsepower engine. Factory advertisements touted its hill-climbing ability, comparing it with vehicles that sported 20-HP engines asking buyers to “reflect on the reason why a squirrel can climb a tree better than an elephant.” Brush used maple, hickory, and oak to construct the car’s frame and axles and mounted coil springs at all four corners. The Brush, claiming a top speed of 35 mph, proved itself capable by climbing Pike’s Peak and finishing the 2,636 mile Glidden Tour in 1909. While Brush built several different models during its brief history, all were small runabouts, which were soon out of fashion due to their limited protection from the elements. In 1910, the United States Motor Company absorbed Brush. The venture ultimately failed in 1913, a victim of fierce competition and the emerging dominance of Ford’s Model T.

Our two-passenger Model D Runabout with an 80-inch wheelbase and a ten horsepower single-cylinder engine joined the Museum’s collection in 2003. It was donated by Donald Brush of Webster, New York. Though no known relation to the company’s founder, Donald pursued this vehicle, at least partly due to the name. When he first saw the runabout, it was hiding in an old hay barn. After more than a year of visits, he finally persuaded the owner to sell the vehicle. The car had three more years to wait, however, as Donald finished his engineering career at Eastman Kodak Company. Then he devoted his full attention to returning the Brush to its original glory with much of the work done in his home garage. Though finished in 1978, and attaining major awards decades ago, the Brush is still a bright and shiny testament of the quality restoration and maintenance given by its owner. It is our pleasure to continue that tradition here at the Museum. 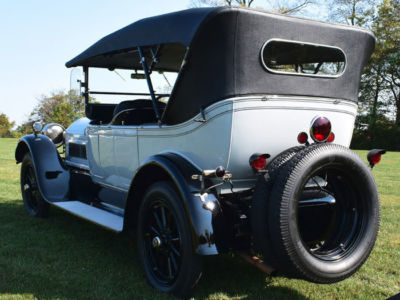 Recently, the Museum welcomed this beautiful pair of Series 62 Cadillacs into the collection. A four-door sedan and a convertible sedan finished in their original Cadillac color, “Valcour Maroon.”

The Series 62 was a Cadillac mainstay in the division’s lineup from 1940 to 1964. It replaced Series 61 as the entry-level model in the luxury brand’s offerings. Designed by Harley Earl, the initial design (1940-1941) featured a low and sleek torpedo style body that was shared with its corporate siblings Buick (Roadmaster), Oldsmobile (Series 90), and Pontiac (Torpedo). The new model stood out from its predecessor due to its streamlined styling, two-inch lowering. Inside, additional cabin space and the relocation of the transmission shifter from the floor to the column offered true six passenger comfort. In 1941 all Cadillacs shared the same 346 cu in, 145 HP V8 engine. The convertible sedan, only available in the 62 Series, made Cadillac history as it was the last time the marque would produce such a model.

These matching pre-War beauties came to us from Judith Scotland of Cheyenne, WY. They were given in memory of her husband, Howard. The couple enjoyed driving and showing both cars and completed much of their own maintenance and repair work over their family ownership history.

The Scotlands have a long history of supporting the AACA Museum, including our boardroom’s sponsorship during the building’s initial construction. Last year Judy donated the family’s Henry Wanlass “New York to Paris” bronze sculpture. Released in 1982, this limited edition depicted the Buffalo, NY, built Thomas Flyer, winner of the 8,000-mile great race. Wanlass made just 30 copies of the sculpture, which sold new for $27,000 and remains in demand by automotive collectors worldwide. The sculpture was the artist’s proof; it is on permanent display in the Museum’s Rotunda.

As a non-profit educational organization, the AACA Museum is proud of its world-class collection of automobiles, art, and related artifacts, all acquired as donations. The Museum is deeply grateful to the Scotland family and all who have contributed to our continued growth. Because of our members, donors, volunteers, and visitors, we continue to be a world-class Museum positioned to weather the current crisis and come out stronger on the other side.

’55 Imperial Sedan: “The finest car America has yet produced.”

The term Imperial has been synonymous with Chrysler luxury since 1926. However, beginning in 1955, the company took the name one step further, making it an independent marque, the Imperial Division of Chrysler Corporation. Like Cadillac for GM and later Continental for Ford, Imperial represented Chrysler’s most luxurious vehicles.

Virgil Exner introduced his all-new design, the “Forward Look” across the Chrysler divisions beginning in 1955. While Imperial shared its body shell and platform with Chrysler’s other big cars, Imperials were distinguished by a four-inch longer wheelbase offering additional legroom, as well as “gunsight” taillights and an “egg crate” front grille. The 1955 lineup included this sedan, the Crown Imperial 8-Passenger Sedan, a limousine, and the “Newport” two-door hardtop.

This Imperial is a mostly original car. It is powered by a factory-installed 331 cubic-inch “Hemi” engine that has never been rebuilt. The low mileage car was never far from home before its trip to Hershey for the “Yeah, It’s Got A Hemi” exhibit. It was ordered new by the Postmaster/Station Master of the Bryn Athyn Post Office in Montgomery County, Pa. Its full leather interior in medium and dark gray is extremely uncommon. The car came standard with power-assisted brakes and steering. The optional heater/defroster added $82 to the car’s total sale price of $5,122.33. The original invoice shows the buyer received a $1,400 trade-in credit for a ’50 Chrysler Sedan.

The Eisenhower administration used these vehicles extensively. David Eisenhower and Julie Nixon Eisenhower have ridden in this car, as has Lee Iacocca! These are just two notes from the car’s storied heritage provided by owners Hank and Allison Hallowell