Driving After Sundown: The Evolution of Headlights 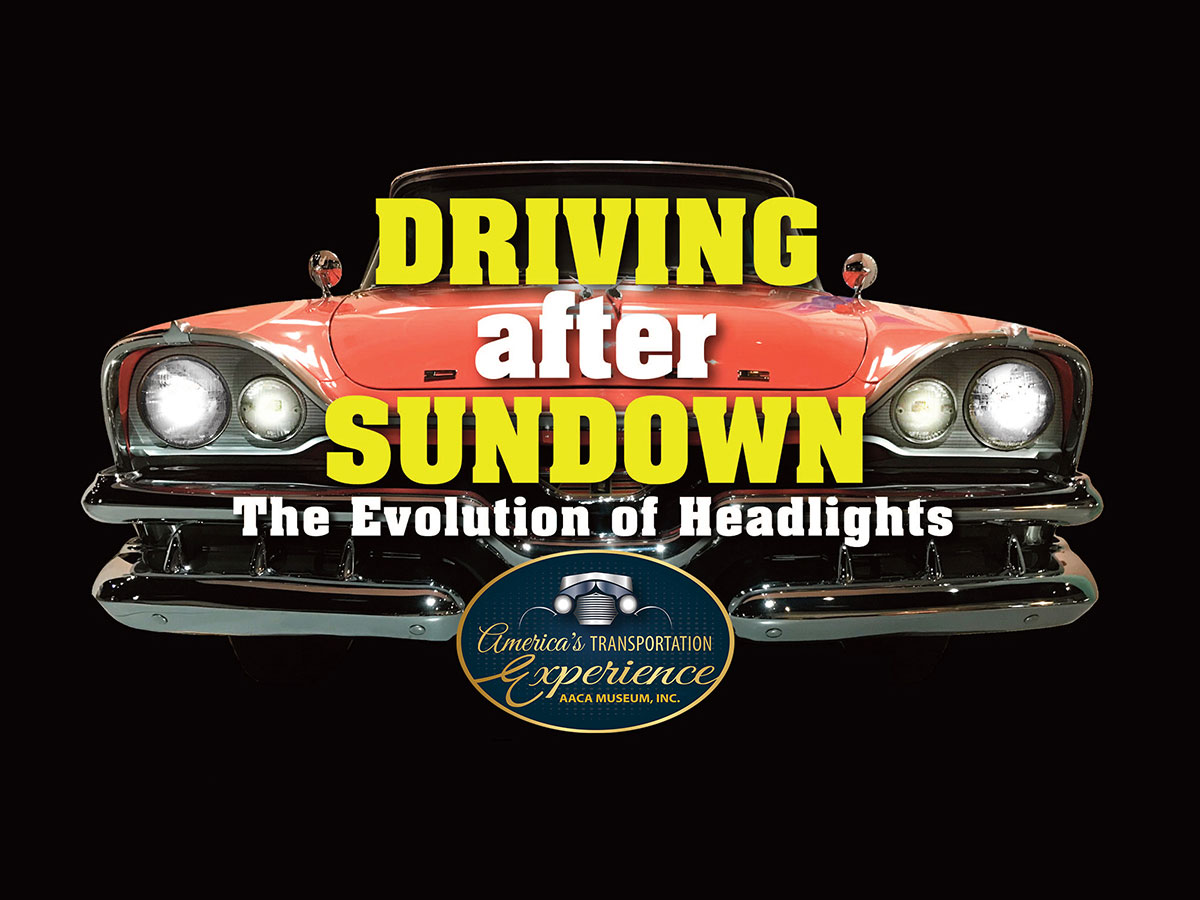 From the first days of the automotive era in the 1880s, drivers (and passengers!) wanted to see and be seen as they motored about at night. They also needed to ensure that the glare from their lights would not blind oncoming drivers. They wanted to stay on the road and avoid anything that would ruin their trip. It turns out motoring lighting challenges are harder to solve than one might think.

To explore night driving’s innovative history, the AACA Museum, Inc. has launched a new permanent exhibit titled “Driving After Sundown: The Evolution of Headlights.” Located in the Museum’s Main Gallery, this exhibit delivers a unique hands-on interactive multi-media experience. Using an adult learning approach, the display shows how lighting technologies evolved over the past 140 years giving drivers usable light while minimizing the effects of glare on oncoming vehicles. The exhibit includes lighting effects from the days of candles, oil, and acetylene to today’s modern lighting.

The Evolution of Headlights Over the Decades

FROM THE FIRST DAYS of the automobile in the 1890s, drivers wanted to see where they were going at night. Headlights provided bright and safe roads for driving after sundown. Throughout the decades, there have been several landmark eras of headlight evolution and innovations.

Open Flame (Candles & Kerosene)
IT WAS A DARK WORLD at the dawn of the automobile and the birth of the headlight. On horse-drawn carriages in the 1880s and early 1900s, the lowly candle hardly lit the road, and dim lamps posed no glare problems. While brighter than candles, kerosene lamps functioned more to “be seen” than to illuminate the road ahead. Glare had yet to become a concern. Even into the first decade of the automobile, kerosene lamps were commonly used, but only as sidelights to help make vehicles more visible at night. Some could be removed from the vehicle to be hand-carried for lighting footpaths. Today, kerosene is mainly used to fuel jet engines.

Improved Open Flame (Acetylene Gas)
ALTHOUGH DRIVERS STILL HAD TO STRIKE A MATCH to “turn on” their lights, brighter acetylene lamps, and reflector refinements provided a more forward-focused headlight. Acetylene was the gas of choice because it produced the whitest light when burned. Acetylene was a brighter alternative fuel for household lighting as well. Acety­lene was provided on early cars in two ways: Generators that combined carbide with water, and “Prest-O-Lite” tanks that could be recharged (or exchanged) and held the gas under pressure. The nighttime road was now made visible.

Early Electric Lights (191 0s-1920s)
THE ARRIVAL OF ELECTRICITY sparked the next 100 years of headlight innovations. Electric automobiles of the period were the first to use this new illumination source, but gasoline and steam cars could not yet provide enough electrical power to operate them. With improvements in generating power and batteries, electric headlights became an automotive norm, optional on many vehicles at first, then standard equipment. Low and high beams were pioneered. Roads became much brighter, heralding the birth of the dangers of glare.

Projector Headlights (1920s-1930s)
ATTEMPTING TO ADDRESS THE GLARE PROBLEM, electric projector headlights utilized elliptical reflectors paired with lenses, some tinted amber or green on the upper half. The tinted “high beam” was much easier on the eye. There was a wide variety of lens and reflector designs during this period and many types of bulbs, all attempting to provide the best illumination of the road while minimizing glare. One drawback was the need for constant maintenance to keep their brightness at its maximum. They had to be disassembled regularly to replace